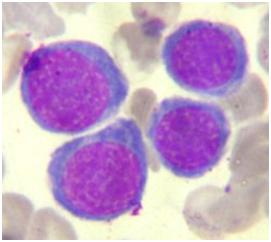 Pleuripotent stem cells give rise to erythrocytes by the process of erythropoiesis. The stem cell looks like a small lymphocyte and lacks the functional capabilities of the erythrocyte. The stem cells have the capacity of infinite division something the mature cells lack. Some of the daughter cells arising from the stem cell acquire erythroid characters over generations and time. Most of the erythroid cells in the bone marrow have a distinct morphology but commitment to erythroid maturation is seen even in cells that have not acquired morphological features distinctive of the erythroid lineage. These cells are recognized by the type of colonies they form in vitro. Two such cells are recognized. Burst-forming unit erythroid (BFU-E) arise from the stem cell and gives rise to colony-forming unit erythroid (CFU-E). CFU-E gives rise to pronormoblast, the most immature of erythroid cells with a distinct morphology (figure 1). BFU-E and CFU-E form a very small fraction of bone marrow cells and are not important in diagnosis. Examination of Romanovsky stained (Giemsa, Wright’s) bone marrow smears is central to the haematological diagnosis. Morphologically five erythroid precursors are identifiable in the bone marrow stained with Romanovsky stains. The five stages from the most immature to the most mature are the proerythroblast, the basophilic normoblast (early erythroblast), polychromatophilic normoblast (intermediate erythroblast), orthochromatophilic normoblast (late erythroblast) and reticulocyte (figure 1). As the cell matures the following morphological changes take place

Proerythroblast: Proerythroblast (figure 2) is a large cell (12-20μm in size or about 1.5-3 times a normal erythrocyte) with a large nucleus that occupies almost 80% of the cell and a blue cytoplasm that forms a thin rim around the nucleus. The chromatin is finely granular and stripped. The nucleus shows multiple nucleoli (the multiple pale staining areas in the nucleus). The cytoplasm may show a small pale area that corresponds to the Golgi apparatus and may have a pale perinuclear halo. While it is usually possible to tell a proerythroblast from other blasts (myeloblasts, lymphoblasts and monoblasts) by it’s more homgenous of cytoplasm, larger size ,a chromatin that coarser and the perinuclear halo in very immature cells this distinction may be impossible.

Orthochromaphilic Normoblast: The process of haemoglobinization is almost complete by the stage of orthochromatophilic normoblast (figure 6). “Ortho-” in Greek means straight, upright or correct. Though orthochromatophilic suggests that the colour of the cytoplasm is the same as mature erythrocyte, this is not the case. The orthochromatophilic normoblast is the nucleated erythroid precursor that is closest to a mature erythrocyte in terms of size (8-12μm) and cytoplasmic staining. The cytoplasm however retains a blue tinge much like a reticulocyte. The nucleus is greatly condensed, shrunk and assumes a variety of bizarre shapes (buds, clover leaves, double spheres). The chromatin is greatly condensed and almost completely homogenous.

Relates posts in this site