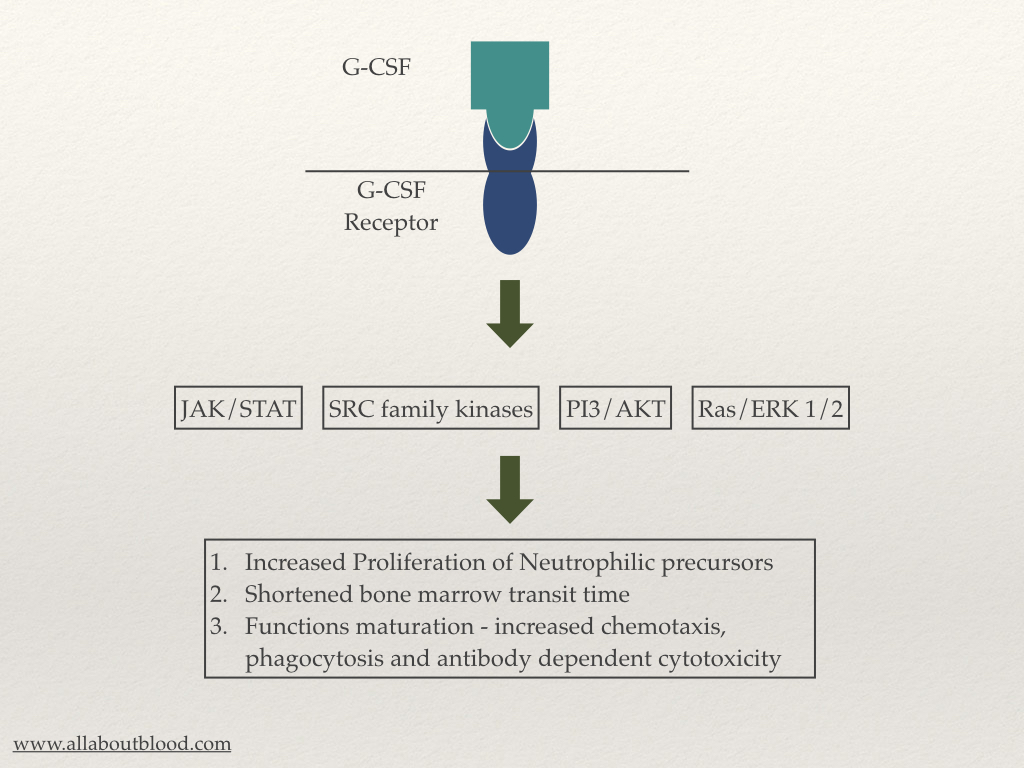 Neutropenia is a dose limiting toxicity of chemotherapy. It results in delay and dose reduction both of which adversely affect outcomes of treatment. Myeloid growth factors are biological agents that stimulate the production go granulocytes and offset the myelosupressive effect of chemotherapy. Two myeloid growth factors are available Granulocytic colony stimulating factor (G-CSF) and granulocytic monocytic colony simulating factor (GM-CSF). This article will discuss G-CSF as it is used more often than GM-CSF. Commertially available G-CSF is made by recombinant DNA technology and may be produced in E. coli (Filgrastim) or chinese hamster ovary cell lines (lenograstim). The half life of filgrastim can be increased by covalently linking it to polyethylene glycol (PEG) and converting it to pegfilgrastim.

Mechanism of Action of G-CSF

G-CSF is a 174 amino acid peptide the gene for which is on chromosome 17. It has a molecular weight of 18kDa. It is produced by monocytes, macrophages, fibroblasts, endothelial cells and keratinocytes in response to inflammatory cytokines and bacterial endotoxin.

G-CSF acts via the G-CSF receptor. G-CSF receptor is a transmembrane receptor that form a homodimer on binding G-CSF. Activation of G-CSF receptor results in activations of  JAK/STAT, SRC family of kinases, PI3/AKT and Ras/ERK 1/2. The details of the pathway are not completely understood.

G-CSFs Available for Clinical Use

Filgrastim on subcutaneous administration filgrastim has a half life of 2.5-5.8 hours. The drug is eliminated by uptake be G-CSF receptors on neutrophils and glomerular filtration. Pegylation, that involves attaching a 20kDa polyethylene glycol (PEG) molecule to the N terminal eliminates renal elimination prolonging the half life to 27-47 hours. The product, pegfilgrastim, is only eliminated by binding to neutrophil G-CSF receptors, patients with low neutrophil counts have a lower clearance. Prevention of glomerular filtration allows administration of pegfilgrastim only once in a chemotherapy cycle.

The discussion that follows applies to filgrastim and perfilgrastim as these drugs are used more commonly than lenograstim. The general principle apply to lenograstim but readers are advised to refer to information on lenograstim for details of use and adverse effects.