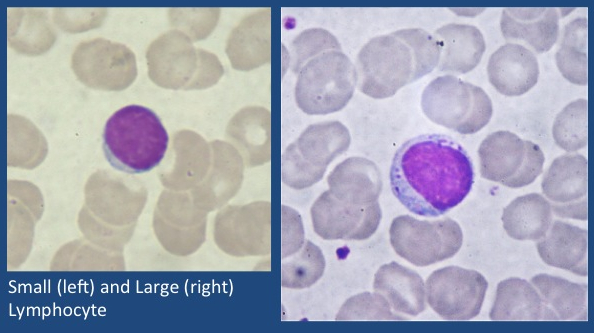 Clinical Profile of Patients with Lymphocytosis

Infectious Mononucleosis: Infectious mononucleosis (IM) is a self limiting disease of adolescents that presents with prodrome of fatigue, myalgia lasting 1-2 followed by fever pharyngitis and lymphadenopathy, splenomegaly, hepatomegaly and rash. The peripheral smear shows lymphocytosis with atypical lymphocytes. These are irregular, have slightly larger nuclei, a more open chromatin and abundant cytoplasm. Some cells may appear blastoid. Atypical lymphocytes are predominantly CD8+. Differentiation from lymphocytosis of malignancy is made by

Other infection: Atypical lymphocytosis is a feature of other infections listed in the table above. Typical features of the causative infection may or may not be present. CMV associated mononucleosis syndrome is indistinguishable from IM. Lobulated lymphocytes are a feature of human T-lymphotropic virus type I (HTLV-I ) infection.

Lympocytosis with B pertussis: Pertusis caused by Bordetella pertussis with upper respiratory symptoms that evolves into a paroxysmal cough in about 1-2 weeks. Pertusis is an exception amongst acute respiratory infections in that it causes lymphocytosis rather than neutrophilic leucocytosis. Unlike other viral infections lymphocytes of pertussis are small and have cleaved nucleus.

Stress Lymphocytosis: Stress has been associated with an increased lymphocyte count. Counts may range 4,000 to 10,400/mm3. All subsets of lymphocytes increase. The counts normalises after the stressful event passes (Am J Clin Pathol. 2002 May;117(5):819-25).

Splenectomy: Lymphocytoisis that persists has been reported in patients who have undergone splenectomy (Clin Lab Haematol. 1995 Dec;17(4):335-7).

Monoclonal B cell lymphnocytosis: Monoclonal B cell lymphocytosis is a premalignant condition that has a risk of progressing to chronic lymphocytic leukaemia. It it is diagnosed in a patients with lymphocyte count <5000/mm3 without any other evidence of lymphproliferative disease. The morphology and phenotype of the cells is identical to that of chronic lymphocytic leukaemia. Patients are asymptomatic and the disorder is detected incidentally on a haemogram performed for another reason.

Prolymphocytic Leukaemia: Prolymphocytic leukaemia is a misnomer. The malignant cell is actually a activated mature lymphocytes. Prolympnocytic leukaemia may be of B cell or T cell type. The cells are twice the size of a normal lymphocyte. The nucleus is round with a moderately condensed cytoplasm. A prominent central nucleolus is present. The cytoplasm is faintly basophilic. Morphiology of T Prolymphocytic leukaemia is similar. Patients present with a high count (usually > 100X109/L), massive splenomegaly in the absence of lymphadenopathy. T PLL may show skin infiltration in 20% of the cases. They may also show serous effusions.

Large Granular Cell Leukaemia: LGL leukaemia is characterised by a count of 2-10X109/L. The cell are large granular lymphocytes with abundant cytoplasm and fine and coarse azurophilic granules.